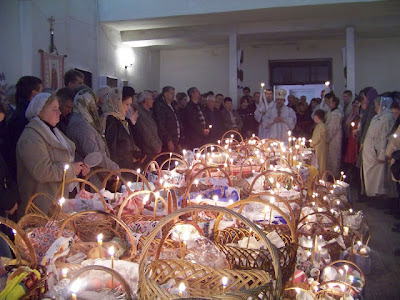 Here in the United States, Easter baskets are most often filled with chocolate rabbits and jelly beans.  In Ukraine, the Easter baskets--and their contents--are an important part of Easter religious ceremonies, one of the most important holidays in the Christian year, but with traditions hearkening back to pre-Christian times.  The two years I spent in Ukraine at Easter time,  the entire week between Willow Sunday and Easter was enthusiastically filled with cleaning of houses and grounds,  general sprucing up, and often, the purchase of new Easter baskets. 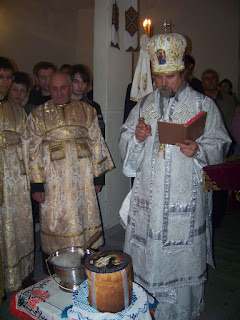 Although my Easter this year was spent at home here in the US, my friend Olga Chermaska shared photos from the morning worship service for children and the blessing of Easter baskets at the Ukrainian Orthodox church her family attends in Kharkiv. 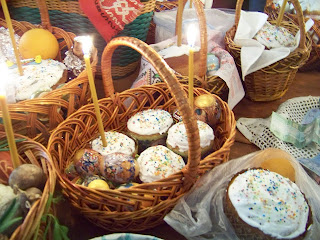 
There is a tradition on Easter basket to put all the products that have been banned in the past [for Lent].  For example, sausage, Easter cakes, dairy products and eggs. The basket should be beautifully decorated. Eggs are usually painted in different colors. Each color means something green: eternal life, yellow - joy, red - the blood of Jesus, blue - water and sky. 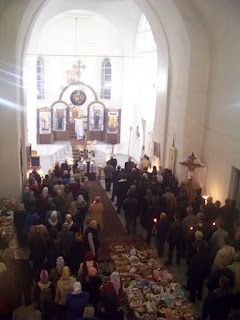 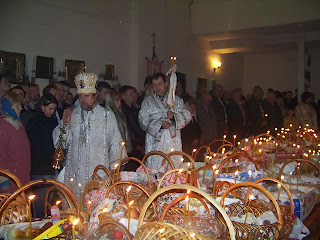 I'm sure the church rang with the traditional greeting, Khyrstos Vostres!  Christ is Risen! In every basket, a paska, Easter bread, is traditionally included (although I have seen Easter baskets containing Coke and other modern foods as well).   Each region has its own special paska,  but here, thanks to Festive Ukrainian Cooking by Marta Pisetska,  is a recipe from the Chyhyryn in Cherkas'ka Oblast,  south of Kyiv.

Line the bottom and sides of a 10 inch tube pan (or 2 tall cans, to be traditional) with buttered brown paper.  Sift flour and sugar separately, then sift flour with 1/2 cup sugar.  Beat egg whites with wire whip until foamy.  Add cream of tartar, fold in vanilla, almond extract, and salt.  Whip until glossy and stiff but not dry.  Gradually whip in remaining sugar, a little at a time.  Sift some of the flour-sugar mixture over egg whites, fold gently, and repeat until all flour is used.  Pour into prepared pan or cans and bake in preheated 350 degree oven.  Note:  the tube pan requires 45-50 minutes,  the cans about 30 minutes.  When done, hang pan upside down or invert cans for one hour until set.  Remove, place on platter and sprinkle with powdered sugar. 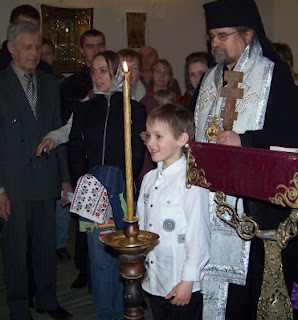 You can see a full set of photos here. Thanks again to Olga and her family for sharing these!
Posted by Linda at 6:50 PM No comments:

This post is the second in a series about the distinct Greek communities of Mariupol, a region and oblast in eastern Ukraine, near the Sea of Azoz. Special thanks to Yangnecheer family and Galina and Carrina. 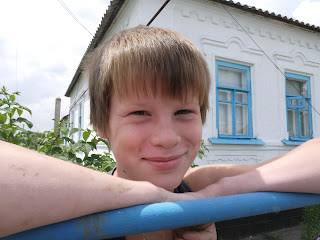 Under bright blue skies, the fruit trees were flourishing with bright red cherries. As we ambled the lanes of the Greek village of Sartana, we admired the tidy, brightly colored houses, fence rows and thriving kitchen gardens we passed. Chatting idly with a friend in English, we heard a friendly little “hello” from behind a cloud of green leaves. Following this welcoming voice, we met the charming 11-year-old Vova. Vova lives in Sartana with his sister, Irina (21), her husband, Alexander (25), and their children, little Tatiana (1) and Varvara (2.5). 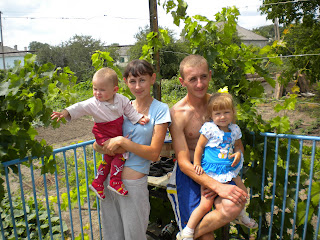 The family was hanging laundry in the patio, as we strolled by. Alexander told us that he is from a Greek family and has lived in Sartana his whole life. He said that, during the harvesting months, the family spends much of their summer tending the garden and preserving the food they grow for the winter months. 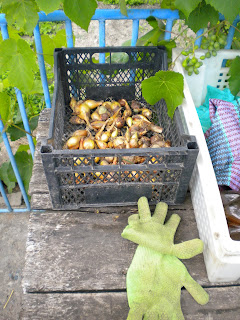 With a shy smile and generous nature, Vova, gave us a tour of their garden. They raise cucumbers, potatoes, beets, cabbages (two rotations), onions, squashes, eggplants, carrots and an array of herbs, including parsley, chervil (!) and dill. 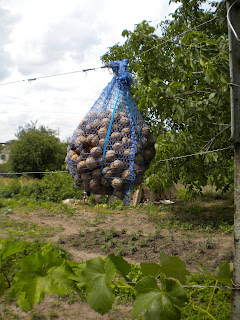 Walnut and cherry trees line one end of the garden, the other flanked with bushes of raspberries, gooseberries and currents. Grapevines lace the fence between their patio and garden, where jars were set out for ongoing preservation of the summer’s bounty. Just the day before, the family had made raspberry jam and pickles. 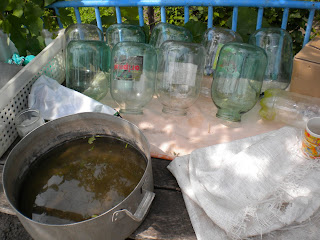 As we explored the garden, Vova picked the perfect gooseberries, passing them to me to enjoy and occasionally popping one into his own mouth too. He described the progress of each vegetable in the garden, thoughtfully describing the desired growing conditions of each plant with impressive insight. 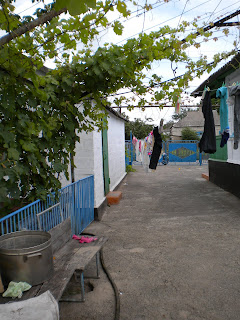 He expressed concern about the season’s meager harvest of apricots and apples. “Last year, people kept all the honey for themselves. So, this year, there are not so many bees. There are not enough to pollinate all the fruit trees.” “But” he said smiling, “this year has been pretty good for berries” he explained. “The raspberries are much sweeter than last year.” 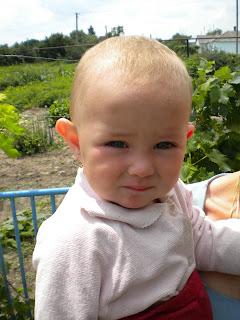 Our Debut Video! What Food Reminds You of Home?

Last summer, on a visit to Simferopol, Alie Yuldasheva was generous enough to sit down with us in a Crimean Tatar restaurant and talk about her own family traditions.  We're far from video experts,  but this was the start of some short video podcasts that we'll be sharing with you.   The Crimea provided us with so many memorable experiences and we were privileged to learn more about the diverse cultures there.  Alie's favorite food is a great metaphor for our Pickle Project work.  Plov, she says, "represents [the[ sharing idea."

What Food Reminds You of Home? Alie Yuldasheva from The Pickle Project on Vimeo.

Thanks to Alie for making that sharing idea a reality,  Anna Harty for editing, and Barb Weiser for hosting us on the Simferopol leg of our trip last summer.  And a special note to Peace Corps volunteers:  we met, as you'll hear, Alie through Peace Corps volunteers--so other volunteers,  please join in.  We'd love to see other favorite food videos--a great student project for English teachers!