The Taste of Summer: Watermelon 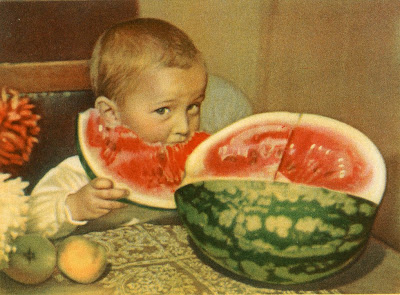 Sarah and I don't manage to be in the same place very often, but two weeks ago our schedules brought us together for lots of catching up over dinner in Albany, NY.  She arrived with a lovely small watermelon from a Vermont farm stand, and it seemed the perfect time to write an appreciative blog about Ukrainian watermelons.  Watermelons (and melons of all types including one called the Collective Farm Woman  are another marker of summer).  Melons appear stacked up sky high in markets, and in funny wire cages on street corners.  There's nothing better than fresh watermelon, as appreciated by this young boy in above in a historic postcard from Ukraine; but Ukrainian cooks are adept at making that summer flavor last. 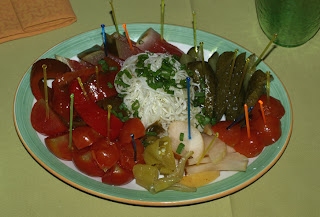 Recipes abound on the web for pickled watermelon rind,  but recipes for watermelon pickles that include the red flesh are much harder to find, but it's a common treat in Ukraine.   Last October, at the Dacha restaurant in Odessa,  pickled watermelon joined a plate of other pickled fruits and vegetables for an incredible treat for the four of us on our Pickle Project Conversation Tour.  It's at the top of the plate in this photo, joined by pickled cucumbers, apples, peppers, tomatoes, beets, and more.  But this kind of pickle is far from just restaurant food.  It's made  by home cooks as well.   Pickled watermelon makes up part of a winter meal at home in Ukraine below  (thanks to Grace Eickmayer for the photo). 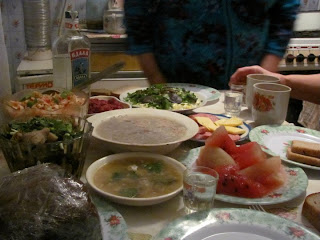 Want to try pickling watermelon yourself?  Here's a recipe via Saveur magazine.  It originally appeared in Pickled: Preserving a World of Tastes and Traditions by Lucy Norris (Stewart, Tabori & Chang, 2003); and was contributed to that volume by Sophia Vinokurau, the owner of M & I International Foods in Brooklyn, New York.

1. In a large nonreactive bowl or pot, stir together salt, sugar, pickling spices, cayenne, vinegar, garlic, celery, dill, and 8 cups water until salt and sugar dissolve. Submerge the watermelon wedges. Cover with plastic wrap and refrigerate for at least 1 week and up to 2 weeks before serving. 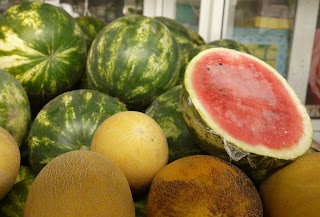