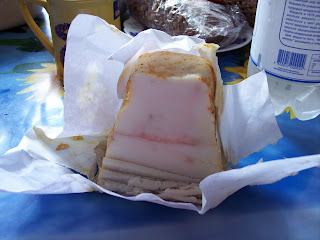 Ah, salo, glorious salo! It is the adored raw pork fat enjoyed on its own and in many of timeless Ukrainian dishes. A classic preserved product, salo (са́ло) is typically fatback that is cut, salted, rolled or tied with twine and hung in cool, dark cellars or cupboards to dry and age.

Salo does vary widely in taste, reflecting diverse curing techniques, flavor additions such as herbs, preservation length, and the animal’s feed. Creamy and white, in my opinion, the best salo is smooth and just a bit salty. Thinly sliced, it is a tasty atop sliced black bread, accompanied by cloves of raw garlic and shots of vodka or horilka. Finely chopped, it provides an ideal medium for sautéing perfectly crispy potato slivers or golden onions to complement varenyky.

This week, a festival was held in the frigid streets of Poltava to celebrate the wonders of salo. Apparently, the Poltava region has a long standing connection to pork production. According to the book Culinaria, edited by Marion Trutter, the city of Myrhorod in Poltava Oblast, was a center for livestock trading in its central market, since the 17th century. Indeed, the Myrhorod pig is a signature breed for salo in Ukraine prized for a high fat to lean meat ratio.

Salo is also a cultural icon and source of pride for many Ukrainians, who jealously guard recipes or the names of butchers from whom they source their choicest slabs. Joke and anecdotes about the relative importance of salo in one’s life abound. (As in: “Toward what does a drowning man swim? His wife or his salo?”) While visitors famously cast aspersions on this national love of lard, the trend is catching on as cracklings and cuffia are hot topics of foodies around the globe ($7 bacon chocolate bar, anyone?). And, why not? Truly, what is not to love about pork fat?
Posted by Sarah at 8:49 PM 6 comments: 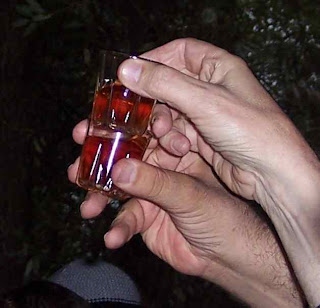 After a recent afternoon of skiing, it hit me: I want vodka. A chilled shot of Ukrainian horilka, to be precise. Ukrainian vodka is called horilka (горілка) and is generally distilled from potatoes or grain, byproducts from some of the country’s biggest agricultural commodities. Good horilka is clear, smooth and quite pleasing to quaff. The practice of flavoring horilka and somohon (самогон), home distilled spirits, is also very common, apparently dating back centuries as a way mollifying less purified, lower quality horilka. Utilizing fruits, berries and herbs collected from forests and home gardens, the alcohol is infused for weeks or months and strained of the fruits before serving. Imbibing the aromatic concoctions is fashionable from village kitchens to hipster night clubs.

Some traditional infusions include kalyna (kалина), the beautiful red berry and Ukrainian cultural symbol; sweet raspberries (малина), blackberries (ожина) and sweet grass (зубрівка), a flavor popularized by the commercial Polish Zubrowka (fantastic with apple juice). Horilka flavored with tiny, wild blueberries (чорниця) is a personal favorite. Medovkha (медовуха), horilka sweetened with honey, is also quite popular. To this libation (or plain horilka), red hot chile peppers are often added, giving it a flaming, yet surprisingly pleasant, zip. Cherry (вишнівка), it should be noted, bears some parallel to cough syrup. That said, horilka preparations with lemon peel and herbs, such as St. John’s wort, are commonly used for medicinal purposes and are espoused by Ukrainian grandmothers far and wide. 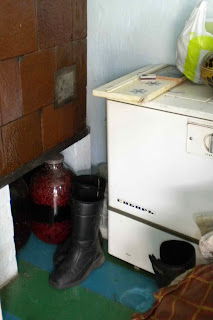 Drawing on discussions with Ukrainian friends and Helen and George Papashvily’s Russian Cooking (1969), covering the Former Soviet Union including chapters on the cuisines of Ukraine, the Caucasus region and the Baltic region, here are a couple of recipes to try yourself.

To a 750 ml bottle of vodka or horilka, add the following ingredients for infused horilka variations. There is no consensus among my advisors on the duration required for proper infusion with opinions ranging from hours to months, with a middle ground around 10 days or two weeks. Strain, serve and enjoy!

2 cups of blueberries (I recommend, tiny wild blueberries but I am told that even frozen would do).

½ cup honey (or more!). This one needs to be shaken, initially and occasionally, over the steeping time.