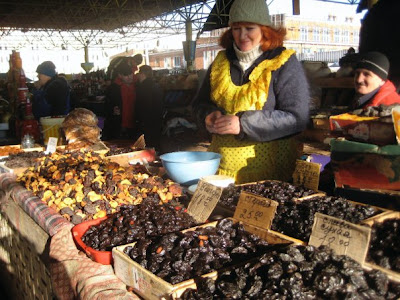 Note:  Christie Bond of Burlington, Vermont is a returned Peace Corps Volunteer from Ukraine and has joined us in working on the Pickle Project.  We look forward to more posts from her!)

As winter approaches, I have been eagerly awaiting the first snowfall in order to tromp the grounds looking for tracks and other animal signs. As a prelude, I’ve been digging into Paul Rezendes Tracking & the Art of Seeing: How to Read Animal Tracks and Sign. The language used by Rezendes, “seeing” brought me back to tracking of another kind – foraging in .

Although one might assume “tracking plants” to be far easier than following the signs of moving animals, it took me a while to find what my counterpart Maria described as my “mushroom eyes.” Not unlike tracking animals, it’s important to wait for the right conditions – rain after several warm days, and then the hope that your mushroom eyes are working! As Rezendes says, “If you know an animal well, you will know where to look for it and when,” - the same is true for mushrooms. 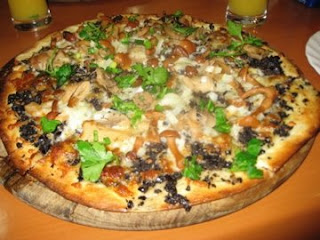 When traveling the highways in , it is common to see babushkas with foraged mushrooms for sale – fresh and dried. In addition, when the weather is right, any location will do. While on a weekend retreat near the river, one of the program planners mentioned he had seen oyster mushrooms near the sanatorium entrance, so we happily ended our meeting in search of them. He brought them back the following day in the form of a soup that his wife had prepared. 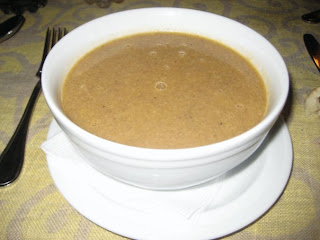 Without Maria, Dr. Valarie, or Tatiana (all passionate foragers), I am reluctant to go on my own. Luckily this fall was particularly rich with giant puff ball mushrooms (which have no poisonous look-alikes). Rezendes believes that through tracking, a person can develop an intimate bond with the animal, and furthermore develop a more keen understanding of their relationship to the natural world. I believe the same can be said for foraging. Through the collection of mushrooms, one can develop a keen sense of their environment. 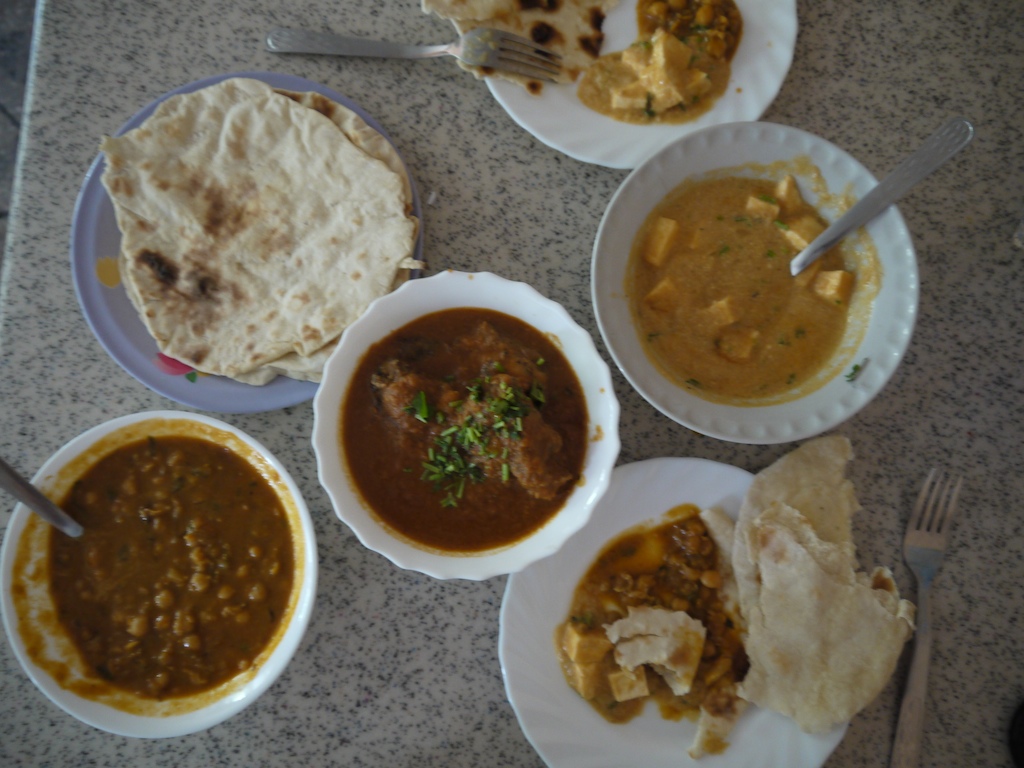 Just off a leafy boulevard in Simferopol, you will find Crimea State Medical University. Every year, this small medical school welcomes hundreds of foreign students from around the world. Young people journey from African countries, the Middle East, Turkey and India, among other places, to study at the medical school, which is for many more affordable than training in their home countries.

Nestled on the second floor of the university’s high-rise dormitories, there is a cafe that caters to foreign students, serving pan-Asian dishes. Wandering up flights of stairs and through darkened hallways, we managed to find the little café recommended to us by several friends.

It was here, over curries and naan, that we met Seethala Devi, who just finished her medical degree a few days before. Seethala, 27, is Malaysian and comes from the Selangor district, about 45 minutes from the capital, Kuala Lumpur.  She has a warm eyes and a kind smile. 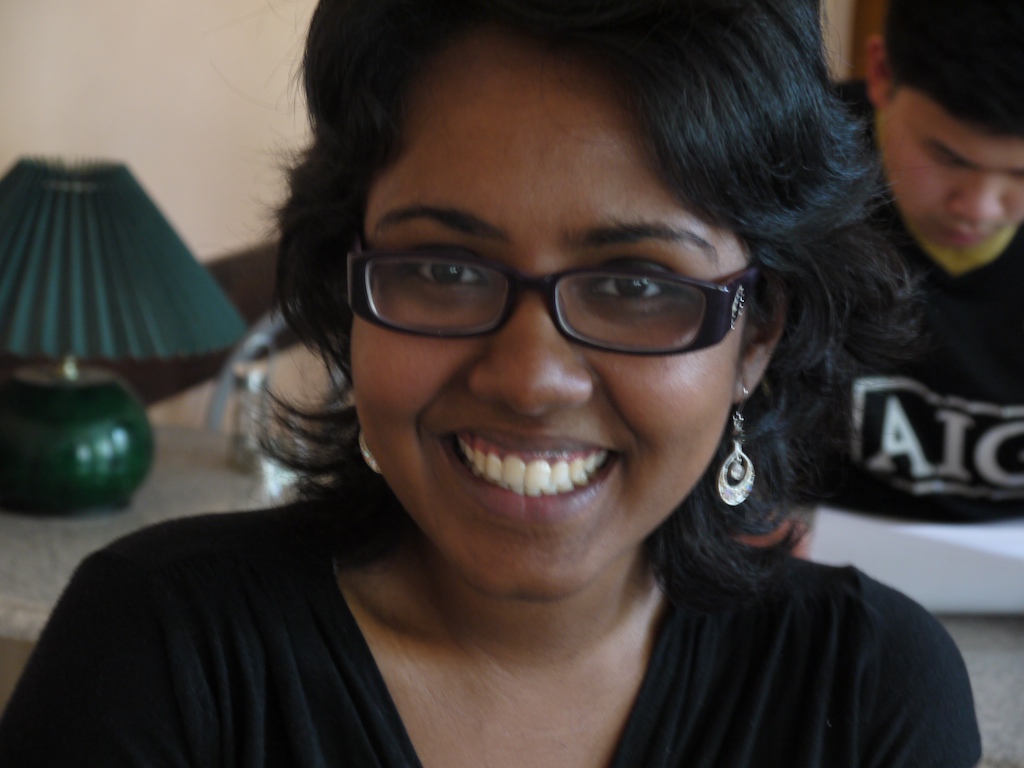 Seethala first came to Crimea for her pre-medical training and decided to stay on for her full medical instruction. Coming here was really hard, at first, she said. It is tough to be alone in a new place with a new language and environment. Then, she told us, she started finding all the positives. “I like it here; I have really enjoyed it.” The hardest part now is missing her family, as she had not been back to Malaysia in four years.

Getting used to Ukrainian food was part of the adjustment to life in Crimea. Seethala smiled as she recalled “When I first came, I became quite plump.” But, as it turns out, she explained, eating local food became a bit like a diet, with simple tastes, fresh vegetables and less oil than many Asian dishes.

She works long shifts at the hospital and packs along with her kasha, cookies vegetables and tea, for her breaks. “I actually really enjoy it. I will bring along some bread and I have a complete meal.” Eyes shining, she admitted that she has also developed a penchant for Ukrainian sweets (as many of us do!). Once in a while, for treat, Seethala stops by a local bakery for a sochnik, a puff pastry filled with the sweetened pot (cottage) cheese.

She still makes favorites from her native Malaysia, however, but access to spices for traditional dishes is limited. Once in a while, she will stop by the café for a quick meal alone, before heading to the hospital and meeting with friends. Like many restaurants in Ukraine, the café often does not have everything on the menu but does has a few daily specials. “It is a gamble, sometimes” Seethala told us and advised us to ask for “what is nice?” Then, you will get what is freshest.

After seven years in Crimea, she is preparing to go back to Malaysia and was hoping for an internship in Sabah, the oil rich province in the Northeastern part of the country.  It will be a transition too, she said. “I am really going to miss it here.” 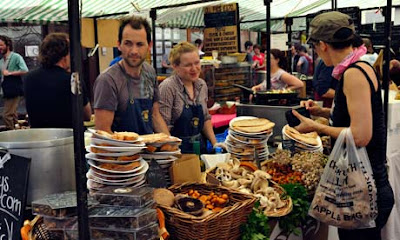 Today, I'm headed off to work on an exciting new project for Context Travel, helping to develop resources and approaches for their scholar/docents who present fascinating, indepth city learning experiences.  But that also means, I hope, that I'll carve out time to visit city markets in London, Rome, Paris, Florence and Venice.   I love food markets of all types, so I'll be sharing some images here and on our Facebook page with all of you.  A detour from Ukraine, but I hope you enjoy them!
Posted by Linda at 7:44 AM No comments: