Out of this World Apples 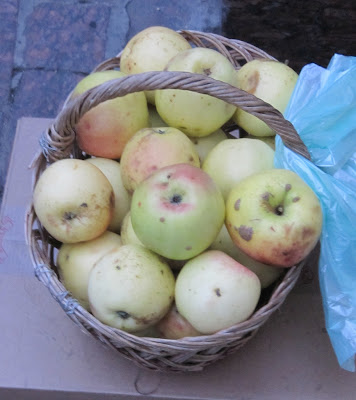 Last year, the apple tree in our backyard here in the Catskills was heavy with apples, with every branch full.  This year, there's barely an apple to be seen out there, due to an late frost last spring.  So despite the scarcity of apples in my immediate neighborhood, fall always seems a good time to think about apples.

Berries and cherries may seem like the most prevalent fruits in Ukraine as they're so scrumptious, prevalent and available in the summer months.  But apples take center stage come fall.  You can eat them fresh, picked from the tree in your dacha's garden;  you can make apple cakes;  you can dry them, and use them to make a compote from that;  you can have pickled apples,  or make apple wine or brandy.  So rather than those big, hard supermarket apples, Ukrainians have all these ways to make the flavors of real, taste-filled apples last the year-round.

Dried apples are just one part of what makes uzvar, a drink made from soaking dried apples, plums and perhaps pears in liquid.  The drink often has a smoky taste, from the way the fruits are dried,  and to me, is a bit of an acquired taste. 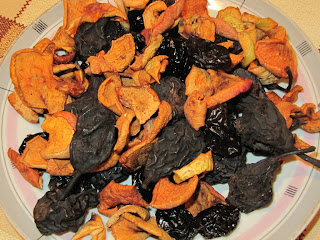 A little web research told me more about Ukrainian apples--several of these heirloom varieties can also be found in North America.  On several sites describing apple varieties, I wondered whether apples whose origins noted as Russian were perhaps Ukrainian.  From Crimea, there's the Kandil Sinap, also called Jubilee.  Discovered growing wild in Ukraine in the 1700s was the Alexander apple, which came into Britain in 1805;  and then made its way to the United States. 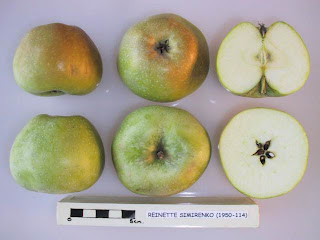 One of the most notable apples was the Reinette Simirenko (above)  which, some agronomists say, may be the same as Woods' Greening, an American apple. But it may have originated in P.F. Simirenko's Ukrainian garden.  I could just find a bit about Simirenko,  who evidently was an expert in fruit crop breeding in Ukraine but whose work was opposed by Soviet horticulturist Ivan Vladimirovich Michurin, leading to Simirenko's imprisonment and death in the 1930s.  But evidently the taste of the Reinette Simirenko is out of this world--Soviet cosmonauts snacked on it in space! So perhaps it's a carefully wrapped Reinette Simirenko you glimpse in this video showing ground level tasting of cosmonaut food.


By now, via screen or page, it seems everyone has taken in the vast, almost magical fields of sunflowers in Jonathon Safran Foer’s Everything is Illuminated. Love or loathe Everything is Illuminated (not to cop out but I find myself squarely on the middle ground, except where Eugene Lutz is concerned.), it set an imagination of the Ukrainian countryside as a sunny, golden sea.

I must admit, there is something sort of dreamy or wistful about sunflowers, their vibrant yellow color, the way they are said to lift their heavy heads together, following the sun across the sky. (This tracking of the sun is called heliotropism but there appears to be lack of consensus as to whether sunflowers are true heliotrophs or maybe only in early life stages. As a child of the American Midwest, I swear that I have witnessed this. Any sunflower scientists out there that can clarify?)

In the genus Helianthus (sound familiar?) with sunchokes, sunflowers originate in the Americas but were brought to Europe by those intrepid Spaniards in the 16th Century.  According to Cullinaria, edited by Marion Trutter (2006), sunflowers came to the Dnieper Valley with Peter the Great, after a trip to Western Europe in the mid 1500s. Peter, who was something of a sunflower aficionado, was fond of their bright colors but they soon emerged as an important food source.

Sunflowers, соняшник in Ukrainian, are grown for seeds, which are pressed for oil or cracked and roasted as a food stuff for people and animals, particularly poultry. Referencing my trusty Encyclopedia of Organic Gardening (Rodale, 1971), I learned that sunflowers are highly nutritious, very rich in protein, calcium, phosphorus, thiamin, riboflavin and niacin and are an important source of linoleic acid (good for hair and skin, by the way). Sunflower oil is generally cold pressed, which helps to retain the oils nutrients and vitamins.  In my experience, sunflower oil is the oil of choice among Ukrainian cooks. It complements fresh veggies, as well as meats.

Oil production began in Ukraine around 1835 and that the Kherson and Zaporhiza regions were critical to fat supplies during the Second World War and in the Soviet Area. Overtime, sunflower oil production has remained an important economic resource in Ukraine, though the industry has struggled to keep pace with crop resistance and industry standards. All that said, according to this recent post from PR Newswire, Ukraine now produces a quarter of world’s sunflower oil, comprising 51% of the global export market for the commodity. Interestingly, India is the top consumer of Ukraine’s sunflower oil. A 15% decline in production is anticipated for Ukraine’s sunflower oil production over the next year, based on adverse weather projections.

Whole sunflower seeds are a very popular Ukrainian snack and are found studding breads and sweets. Markets stalls feature a dizzying array of varieties and preparations. On street corners, kerchiefed grannies sell sunflower seeds for birds.
Posted by Sarah at 3:48 PM No comments: 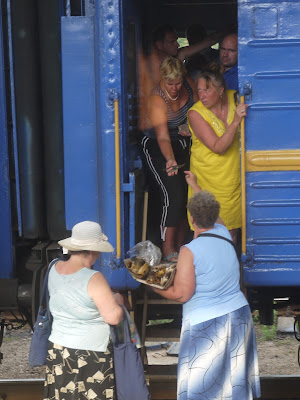 This past week I did a rare thing for most Americans--took a train ride--and although the scenery was different (traversing along the Pacific Coast from Los Angeles to San Diego) it brought back many memories of so many train trips in Ukraine, so I thought I'd share a bit about Ukrainian train food.

Last summer, Sarah and I embarked on trains that literally took us around Ukraine--from Kyiv to Donetsk to Simferopol to Odessa to L'viv and back to Kyiv.   It was holiday season for many and I was struck by two ways in which local residents living near train stations made additional income by supplying food to those hungry travelers. 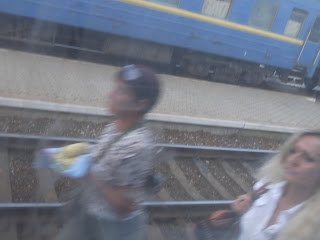 At several stops,  people waited for trains to pull in and sold food up into the doors and windows of the train:  smoked fish,  corn on the cob, and more.   Anxious travelers stocked up for the overnight trip. (sorry for the blurriness of some of these photos,  taken on the fly through a train window) 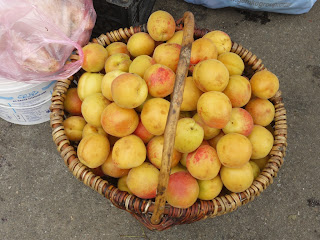 Still other entreprenuers appeared with buckets and baskets of berries, peaches, plums, cherries and more, to be purchased as fresh as can be, gently carried home, back to the city, for canning and preserving.  At one station in the Carpathians, travelers passed through a friendly gauntlet of women with all sorts of fresh (and as we can attest, delicious) things for sale.  It reinforced for me the ongoing importance for Ukrainians of a direct connection between consumers and producers.  You want to be able to look a vender in the eye and talk about the food. 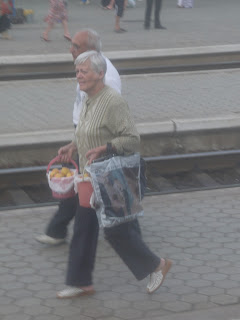 We were no exception. Before we started off on any Pickle Project ride,  we stocked up with food to sustain us along the way:  pickles,  salty string cheese, dried fruit and leposhka, a round bread like naan, baked on an oven.  If it was summer, berries, cherries and plums;  in winter,  dried fruit.

And of course, there's one drink that epitomizes Ukrainian train travel to me.  It's that hot morning tea,  delivered briskly by the train attendant to your compartment in the morning as you approach your destination in its old fashioned yet lovely glass with a metal holder that clinks a bit as the train lumbers and rattles along and you watch the countryside pass by.  If you've been a Ukrainian train traveler, what food memories can you share? 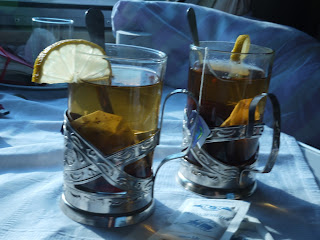 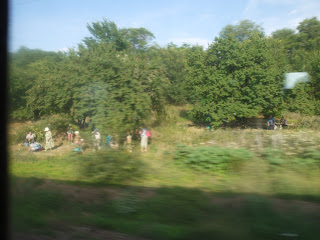