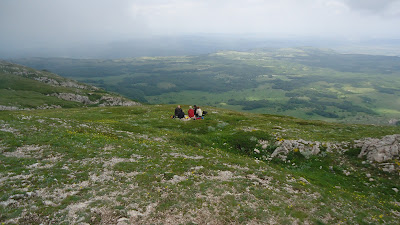 Our intrepid Crimean correspondent, Peace Corps volunteer Barb Wieser,  continues to update us on life and food in Crimea.  An avid outdoorswoman,  Barb has found incredible hiking in the mountains of Crimean and in this post,  shares a mid-hike meal, Ukrainian style.  Thanks to Barb, for sharing, and thanks also to Cheryl Pratt,  a fellow Peace Corps volunteer, and Lilya Emerova, a colleague of Barb's, who each took some of these great photos.
One of the things that has amazed me about food in Ukraine—and continues to amaze me after three years of living here—is how Ukrainians never hesitate to turn an ordinary meal into a banquet.  Weddings, holiday gatherings at work, birthday dinners at home, relatives visiting, breaking of religious fasts, guests from a different country—the list is endless of the opportunities to turn a typically “good” meal into a true feast. 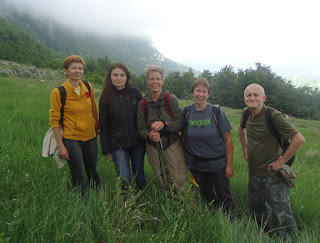 But nowhere do I see this phenomenon so dramatically as out on the hiking trail. More than once I have been travelling with a group of Ukrainians, carrying all of our food and water on our backs, only to sit down for lunch and watch them pull out a vast array of different dishes to share with everyone—a true trailside banquet. This past weekend was a case in point. My hiking partner, fellow Crimean Peace Corps Volunteer Cheryl Pratt, and I joined with our newest Ukrainian fellow hikers for a day trip into the Crimean mountains. Our group was composed of:  Lilya, a young woman who works at my library; Anton, a young man we met on our last hiking trip (where he helpfully guided us back to the right trail as we had gotten a bit lost); his mother Olga, an attractive, very fit looking woman in her forties who works as a psychologist in two local schools; and two individuals we met on the trolleybus on the way to our starting point—Pavel, a 60-something TV technician, and his 13-year old son, Boris. Pavel had heard Cheryl and I speaking English on the trolleybus while looking at a trail map. He gave us lots of friendly advice on future trail possibilities, and then asked if he and his son could join us that day. But, in truth, we ended up joining them. Pavel turned out to be a very experienced hiker and had been on the mountain many times and knew the correct route (which I was a little hazy about). We also realized he was an excellent English speaker, a rarity in a Ukrainian of that age. He told us that in his earlier life he had been a professor of English at a local university.

As we began the long trek up to the high plateau of Chatyr Dag (“tent mountain” in Crimean Tatar), Pavel pointed out the vegetation along the way, frequently giving us the Russian, Latin, and Crimean Tatar names, and told us some of the history of the area --how the plateau was at one time used as a pasture for Crimean Tatar shepherds and later Soviet collective farms--and also how to find some of the fifty caves located on the vast plateau. What a wealth of information he had, and oh so wonderful, he spoke English and I could understand him! 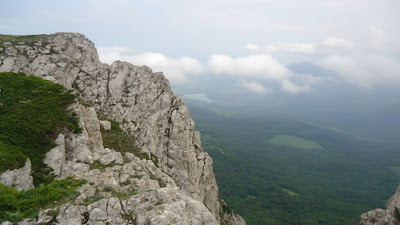 After struggling up some very steep inclines, we finally reached the plateau and made our way to the lowest of the two peaks on Chatyr Dag, marveling at the views all around us as we were on the second highest mountain in Crimea. To the south was the Black Sea, to the east and west the peaks and plateaus of the Crimean mountain range, and far to the north, the city of Simferopol. Somewhere in those distant northern ridges was my village of Ak Mechet, where I so frequently gazed at this very place we were standing on.

The fog from the sea rolled in and out, temporarily obscuring our views and the warmth of the sun. This sea fog is the reason that the Crimean mountains, though not high, are considered dangerous, as the frequent and sudden fogs result in several deaths every season when inexperienced hikers become lost and stumble over the steep precipices on the edges of the mountain plateaus. 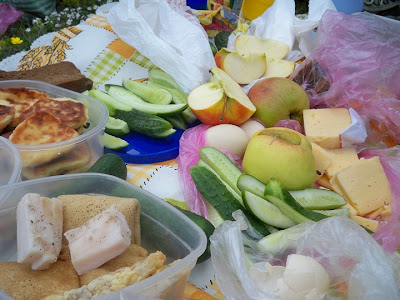 Deciding to take a break after our steep climb, we all settled down on the soft carpet of alpine grass and got out lunch. As usual, Cheryl and I pulled out our standard lunch fare—cheese, bread, hard boiled eggs, cucumbers (in season now), apples, and cookies. Pavel and Olga, however, had other things in mind. First, Olga got out a flower print plastic tablecloth and spread it on the ground. Then she started hauling out food from her and Anton’s backpacks: a plastic container of cheese pancakes (made from the local cottage cheese called tovorg which is frequently sweetened with sugar); another container of cutlets (ground meat mixed with onions and herbs and fried in the ubiquitous sunflower oil); a large bag of cucumbers; bread (“baton” in Russian, what Americans call French bread);  pre-made sandwiches (egg salad I think) on two types of bread, white and dark; and apples and juice. Pavel added salo (cured slabs of fatback, an Ukrainian national food) that he cut into small pieces with his hunting knife, fried pieces of fish, and “blinchikis” (thin crepe-like pancakes wrapped around some kind of filling) filled with a meat/spice mixture that was quite tasty. 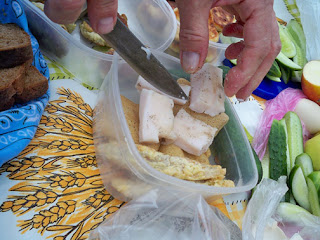 Both Olga and Pavel assured us that all the food was “domashne”—made at home from scratch, as it always is in Ukraine. Pavel even made sure that we knew his mother (whom I’m thinking must be at least 80) made those blinchikis. And also, as always, food was brought to share and in large quantities and was laid out in the middle of the tablecloth where we all gathered around and chose from the many offerings. 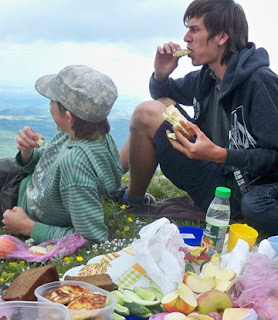 I think about our typical American hiking lunches—each individual having their own sandwich and maybe an apple and a couple of cookies (something I have learned NOT to do here in Ukraine)--and think, “yep, these Ukrainians really have this food thing figured out.” What a wonderful meal in the middle of what turned out to be a long and arduous hike. It provided nourishment for our bodies and also a chance to share with other people, who before that day were mostly strangers, the fruits of our labor.

Rested, satiated, filled with the pleasure of eating delicious food surrounded by the beautiful scenery of Crimea, we were ready to trek on to the highest peak on Chatyr Dag, a few kilometers away, and then down and across the lower plateau to our final destination of the village of Perevalnoe and the trolleybus back to Simferopol. Daylight had faded by the time we arrived in the village after our 11-hour hike, but despite our tired and sore bodies, I think we were all filled with wondrous memories of the day and the gladness of finding new friends to share it with. And of having eaten some really good food. 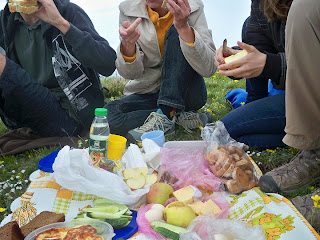 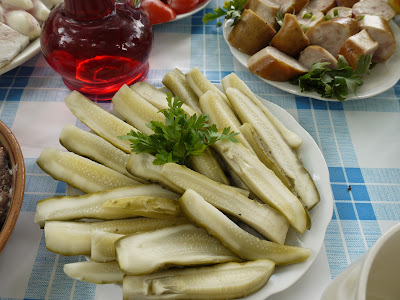 Yes,  it's International Pickle Week...and in celebration,  here's some of our favorite pickles we've seen, tasted, wondered about and enjoyed in Ukraine. Above,  pickles from a memorable lunch under the trees last summer in a Ukrainian village in Donbass. Got a pickle picture of your own to share?  Head on over to our Facebook page to post it there. 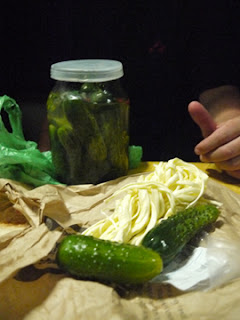 Train food--pickles and string cheese (out of frame, I believe, vodka). 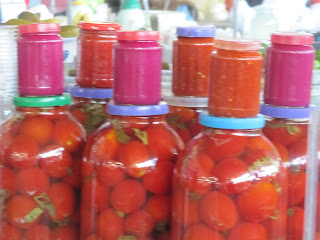 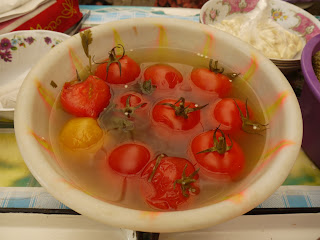 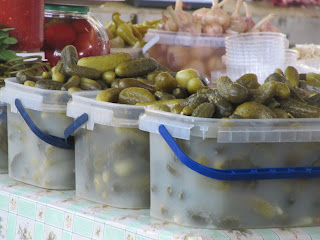 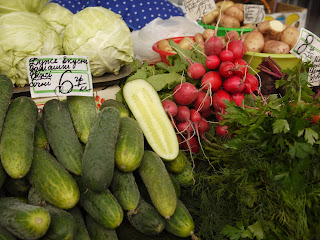 Cucumber pickles, and cucumbers for pickling. 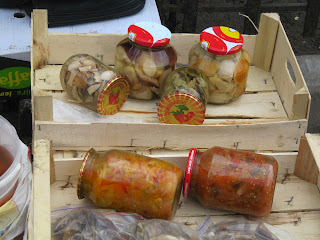 Pickled mushrooms, top and a vegetable assortment.  Below, every kind of imaginable pickled mushroom and below that, pickled apples. 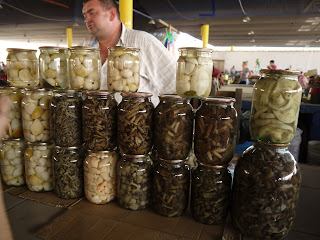 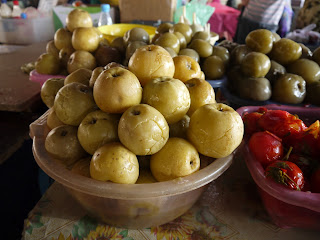 The Tsar's Wine Cellar in Crimea 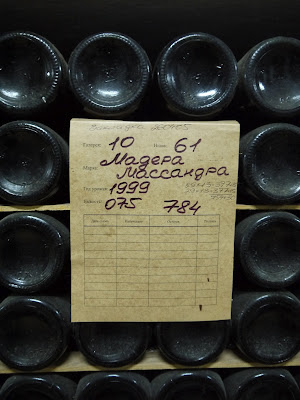 We're still working through our long back-log of posts from last year's visits to Ukraine, and on a bright sunny day here in the Catskills, back from a day driving through the Finger Lakes wine country, I thought I'd write about our visit to Massandra Winery,  near Yalta, in Crimea. 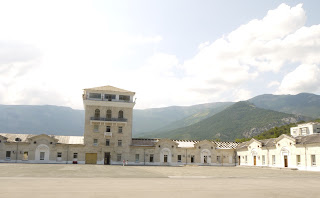 Last July,  Sarah, Barb Wieser, Serdar Sepatiev and I set off to see Yalta and make a stop at the winery on a beautiful sunny July day.  Leaving Simferopol,  we got on a crowded bus,  along the way, passing stands selling the famous red Yalta onions.   We kept an eye out for the stop for Massandra Winery on the way down, and decided to stop on the way back up.  With the help, as usual,  from some of our fellow riders, we got off at the right place and walked up to the winery, in one of the most spectacular locations for a winery I've ever seen.   The winery's first winemaker Prince Lev Golitzin built collection of old and rare wines in Massandra in addition to producing ports and wines including Tokay and Muscat, using grapes from locally planted vineyards.

The winery buildings were built in 1894-1897 and have survived the upheavals from the time of the tsars through World War II and the rule of the Soviets.  It was initially built to supply--and store-- wines for Tsar Nicholas II's summer palace at Yalta.  Supposedly the tunnels at the winery proved the perfect temperature for wine storage and eventually Stalin ordered all wines from all the palaces brought to Massandra.  During World War II, the tunnels were bricked in to preserve the wine from the Nazi invaders.   Some of those rare vintages collected by the tsars, preserved by Stalin and still retaining their vitality,  have made their way to wine auctions at Sotheby's, selling for thousands of dollars. 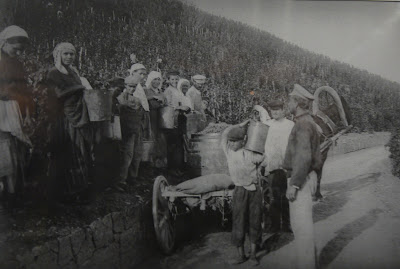 From my museum perspective, Massandra offers one of the best-organized (and not surprisingly,  costly) visitor experiences with a guided tour.  The tour was conducted in Russian,  and thanks to Serdar's interpretation, we got most of the information.  Massandra's history--wines for the tsars,  hiding wines from the Nazis during World War II,  early wine production, and the modern methods of wine production were all highlighted. 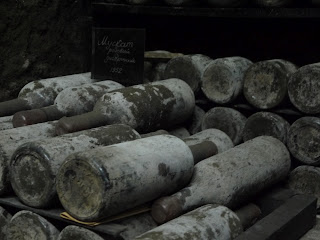 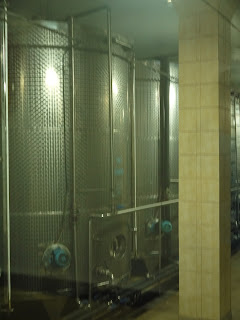 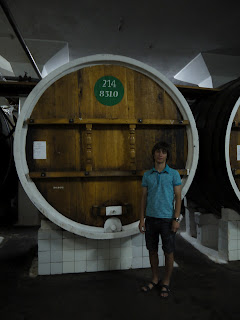 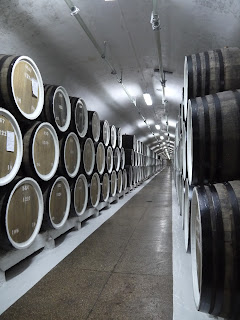 As a bit of internet research seems to tell me,  wine has been made in Crimea for more than 2500 years, with Greek settlers growing grapes in the rocky soil overlooking the Black Sea.  But modern winemaking begins with the winery near Yalta established by Count Mikhail Vorontsov in 1820 and a viticulture institute founded soon thereafter in 1828.

In the Soviet Union,  Ukraine (primarily Crimea) was the largest supplier of wines to the nation;  but Mikhail Gorbachov's campaign against alcoholism ("to health!"  says the poster) in the late 1980s was disastrous for Crimean vineyards--more than 300 square miles of vineyards were destroyed.  Today, however,  we saw vineyards popping up all over Crimea's hills,  with young vines taking root. 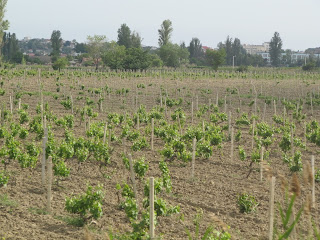 In many ways, Massandra reminds me of much about Ukraine:  ancient roots, complicated histories, a deep connection to the land, determination, and, despite difficulties, hopes for the future.  Now that's worth raising a glass to! 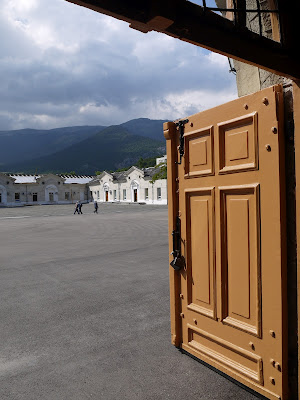