I Can Almost Taste Them: Food Memories of a Peace Corps Volunteer By Kim McCray, Peace Corps Ukraine 2006-2008
We're pleased to welcome another guest blogger.  Kim McCray was a Peace Corps volunteer in Ukraine several years ago and is now  This is the first of three posts about those food memories that stand still stand out,  several years on.  Kim is from Staunton, Virginia and currently lives in Raleigh, NC where she is completing a dual-degree between North Carolina State University's History Department (MA in Public History) and The University of North Carolina at Chapel Hill's Library and Information Science School (MS in Library Science).  Come May, she'll graduate and be seeking work as an archivist. And of course, if you've a food memory to share of Ukraine (or Belarus, or Georgia, or Moldova, or...) we'd love to hear it!
Ask any returned Peace Corps Ukraine volunteer to make a list of the most vivid memories of their time in Ukraine, and somewhere in the top five recollections, probably sandwiched between “crowded marshrutka rides” and “bundled up starfish babies” will be a mention of a Ukrainian dish – of where they were when they first tasted it, of who prepared it for them, and what was going on in their life at the time.  This only makes sense, as just as Ukrainians take great pride in their traditional dishes, we Peace Corps volunteers take great joy in eating them!  In the middle of winter, when it gets dark by 4:30, the temperature dips to zero and without internet or television a book seems your only companion, there is little that can warm the heart of a Peace Corps volunteer quite as much as a neighborly invitation to come enjoy a hot cup of tea and a slice of tort.  And in the hottest days of summer, when school is in recess and traveling from summer camp to summer camp and hosting visiting friends and family from the States starts to wear thin, nothing can beat escaping from a stiflingly hot bus at the end of a long journey to find a kind babusya waiting to sell you a bucket of the most juicy and sweet strawberries you have ever eaten for the high price of about 50 cents.
Now, more than three years removed from my Peace Corps service in the village of Priyutivka (Oleksandriya Region, Kirovograd Oblast), these memories are every bit as rich as they were during my service.  Three particular food memories stand out above those already stated and trigger memories so rich that “I can almost taste them.”
1. THE FIRST SUPPER
As I am sure is true for most former Peace Corps volunteers, my memories of the day I first met my host-family are a bit fuzzy.  It seems that my brain spent so much energy feeding the anxiety and anticipation of the day that it was not able to properly store the memories as it did later Peace Corps events.  The snippets I do remember well are scattered - I remember looking out the window and watching other volunteers pour off the bus when it reached their site.  I remember having difficulty shutting my suitcase in the back of the rickety Lada car that carried me to my house.  I sort of remember sitting on the sofa and sharing a family photo album with my new host-siblings.  The rest of the afternoon is a blur.  It was all so daunting after all - encountering the people I would be living with for the three months of training before my departure to my permanent site.  I did not know what to expect of them, of their home, and especially had no idea how I was going to communicate with them in anyway using the four or five Russian sentences I had managed to learn so far.  I was excited of course, but also quite afraid.
Yet, although most of the first day has now vanished, one more memory sticks out - the first meal I ate with my host family (above with Kim)  I will never forget it.  In fact, I can honestly say that the meal was what set me at ease and alleviated the stress of the day, and it was the meal the symbolized my true entrance into the family. 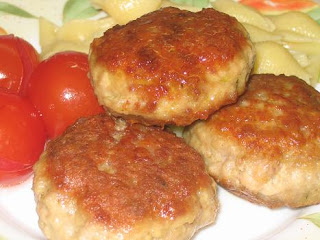 I was summoned from my room by my 17 year old host sister Zhenya with calls of “Kushat! Kushat!” (“Eat! Eat!”), spoken as she moved an invisible spoon towards her mouth. I got the hint and followed her into the kitchen.  I sat down to the table with some hesitation, not having any idea what to expect and fearing the worst, (word on the street among the volunteers was that Ukrainians liked this thing called “salo”, raw big fat…), but I was pleased when Natasha, my host mother, set the table with a spread that I found completely agreeable – pounded pork cutlets, fried to a golden brown, homemade “puree” (mashed potatoes), brown bread and butter, and yes, homemade pickles.  The steam rose off the serving dishes and met with the colder air in a billow as my host mother piled my plate high. I watched as my beautiful host-sister Zhenya ate her food daintily, as any young woman should, and as my 15 year old host brother Sasha dunked his mashed potatoes into a ketchup-mayonnaise dipping sauce and ate ravenously, as any young man should. I ate at a pace somewhere in between, devouring everything I could while taking breaks to flip through my pocket dictionary in mostly vain attempts to answer Zhenya’s questions about “what Americans eat.”  My host mother asked me at least three or four times if the food was good and if I wanted more.  My brother wanted to know if I’d ever had a peanut butter and jelly sandwich.  And so began the tradition of gathering in a warm and cozy kitchen for the nightly exchange of Ukrainian and American culture.

Of course I later came to learn that the meal I’d eaten that night was a very typical Ukrainian meal, and in fact, by the time I moved to my permanent site in late December and moved in with another host mother with a penchant for mashed potatoes and cutlets, I began to get tired of the dish as I craved for the out of season produce that most Ukrainians do not have access to or cannot afford. But I always looked back fondly on that first meal with my host family, during which I felt such an offering of sincere hospitality and affection that I never again felt completely alone in Ukraine. I had a family. They are still my family.

Above:  Pork cutlets via Ukrainian Cuisine
Posted by Linda at 12:37 PM 1 comment: