Help Us Plan the Future! 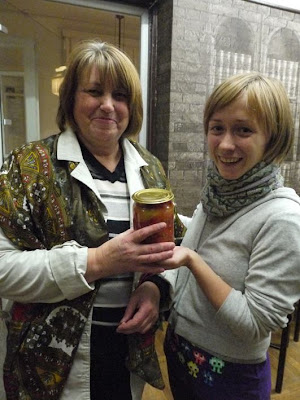 We're now in the process of establishing the Pickle Project as a non-profit organization to explore ways to develop active conversations about food, sustainability and community in Ukraine, the United States and elsewhere.  As a part of that process, we're embarking on a strategic planning process over the next few months--and we hope you'll be a part of it.

All along the way,  from our very first blog post--all of you readers,  guest bloggers, Facebook fans and Kickstarter supporters--no matter where in the world you live-- have inspired us, cheered us on,  and been an integral part of our journey as we explore food and community.   So please just take the survey below (it's short, we promise!) to help us shape the future of the Pickle Project.

Photo:  Anna Khvyl and her mom at the 2011 Pickle Project conversation in Kyiv at the Bulgakov Museum.
Posted by Linda at 1:53 PM No comments:

I have heard native-born Ukrainians refer to the language spoken by members of the Ukrainian diaspora, living in the US and Canada as “kitchen Ukrainian,” a not-quite contemporary Ukrainian, often with English or other influences. It is also meant to reflect the fact that many first and second generation Ukrainian Americans and Canadians learned Ukrainian from their mother or grandmothers, usually while they helped with cooking. Indeed, several friends with Ukrainian roots that grew up in the US and Canada have shared these kinds of insights.

Social scientists actually use the term “diaspora language” to describe the dialects or variations of languages spoken in places of migration. These languages evolve, as all languages do, absorbing new influences and changes to their community. In the context of rapid change in Ukraine, as well as long absences from the country, language and food practices seem to be the most tangible connection to this culture for people with Ukrainian roots living in other parts of the world.

Through the Pickle Project, we too have learned a kind of kitchen language, Ukrainian, Russian and Crimean Tatar, spending time, mostly with women, talking about food. Standing over stoves, hunched over plants in the garden: Як ви сказали? How do you say it?


Maybe it is because that is where Mama is, or, where the food is, or, where the work is.. Everyone is always hanging out in the kitchen. Included here are photos of some kitchens that we have been lucky enough to spend time in.

Of course, nothing foments fervent debate or connections to identity and culture quite like language in Ukraine. So, please consider this an open invitation to share your own thoughts, stories and experiences about the intersection of food practice, cultural preservation and food.