Today's guest post is by Sarah Whelan, a returned Peace Corps Volunteer to Ukraine.  Sarah and another PCV have founded Eastword,  an oral history project devoted to collecting and sharing of oral histories in the former Soviet States.  You can read more about their work--and hear first-hand accounts here.
Gray. It’s the only word that comes to mind when I recall my first winter in Ukraine. I had arrived in October, to a glimpse of fall color that drifted away, yielding to gray and white woolen blankets of sky set above bare branches rooted in frost and frozen ground. The world seemed muffled, as silent people, bundled like nesting dolls walked from store to home, pressed cold hands against warm mouths while waiting for the marshrutka. Dogs wandered the street desperate for scraps and made the acres of dachas that stood behind my apartment building unsafe by their hunger.
“Is this it?” I wondered. “Is Ukraine this silent, cold, gray place? Growling dogs around each bend?” Survival, I concluded, would require preparation. I would be cold, silent, vigilant. I would be tough, silent, totally self-reliant. I would stand against this place solid as a statue, and as soon as I shaped my new, hardened countenance—There was Spring, bursting forth like a new world.
An entirely different country began to bloom, budding with new curiosities.
Once silent neighbors crowded the streets, planting flowers, cleaning away winter’s debris. They flooded into the dacha gardens, hands working furiously in the dark soil to plant the seeds of summer.
Then—a legend arrived: a large yellow barrel rolled out in to the park with one of the only words in Russian or Ukrainian I had known before arriving, Kvass. This was the drink mentioned by Tolstoy in War in Peace. The drink that the French turned down, saying “This is what you serve to the peasants.” The slightly alcoholic drink made from fermented bread. There it stood in its yellow barrel like a cylinder of sunshine people young and old gathered around it, and I felt like I was on the verge of discovery. I took my first sip, and… was it cola, beer, sweet or yeasty, sour? It was all of the above and my tongue didn’t know what to make of it.
Several days later a teacher at school asked me if I tried the drink. Yes, I confirmed.
“Did you like it?”
I shrugged. “It was okay.”
“Where did you have it?”
“The park.”
“Oh well, that’s not the right place to have it. You come over. I make good kvass.”
In her small kitchen the following day, she took great care and pride in explaining how to choose the right dark rye bread, how to create the croutons (or suhari), the right amount of sugar and the all important fermentation starter, zakvaska. Her eyes sparkled as she placed the jar delicately in the refrigerator, as if delivering a newborn to its mother for the first time. “And then you wait,” she said smiling. “It must turn a nice color.” She turned to face me, this time with a finished jar. “Like this.” Twinkle. Twinkle.
I sipped…. Sour, sweet, cola, beer? Again the confusion of flavors.  A doubtful and weak, “Mmm,” emerged from my closed lips.
“It’s good, yes?” she twinkled on.
“Very,” I said, not knowing if I was lying or not. After all, how would I have any idea of what was good kvass and what was bad? I took another sip. Still hadn’t a clue.
“My husband,” she shared, “does not like it very sweet.”
I nodded unaware of how sweet it could be. As the season developed, warming through to blooming flowers, the kvass developed as well. As the gardens began to produce, the kvass shared the bounty--mint and berry lifted on the soft bubbles of carbonation, delivering the harvest, a growing spectrum of flavor as spring turned to Summer…. And then, as magically as it appeared, it disappeared. As a new academic year began and autumn began to threaten cold, the bright yellow barrel retreated. Gone.
Years later I can say that I miss kvass. Not its slightly sour, sometimes sweet, mildly alcoholic variations, but I miss that big yellow barrel in the park. I miss this Norman Rockwell scene of neighbors gathered around in the ultimate declaration of spring. Winter is over and young and old alike would raise a plastic cup in celebration, the signal to leave the cold behind.
Posted by Linda at 6:07 AM 1 comment: 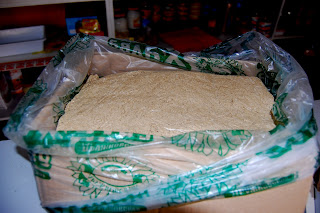 Last spring, an issue of the American food magazine Saveur featured a short article on the New York City based Joyva candy company, the largest commercial producer of halvah, that delicious, nutty paste confection, in the United States. While, I had seen packaged halvah in America, I never tried it until I lived in Ukraine, where it is cut from giant blocks in producti and bazaars. As I learned from Chris McConnell’s Savuer article, the Joyva Company was, in fact, founded by Nathan Radutzky, a Ukrainian immigrant, in 1908. 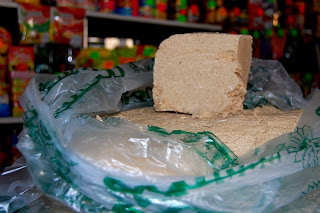 According to Joyva’s website, halvah is an ancient treat whose name means “sweet meat” in Turkish. And, that is about right.. Sticky, crumbly and little spongy in texture (as unlikely a combination as that seems), it has the consistency of fudge. The confection is generally made of ground seeds, usually sesame, or various flours. A little googling and cookbook research suggest that it is also commonly made of sunflower seeds in Eastern Europe and some of the former Soviet states, which makes sense given the abundance of sunflowers in Ukraine. This also explains some of the variation in taste I have experienced around Ukraine, where regional versions of dishes reflect the specific cultural influences in that area. Halva is wonderfully sweet and nutty, often studded with pistachios (which I LOVE and someone told is in a Balkan style), other nuts or dried fruits. It is also sometimes covered with chocolate. My favorite havlah is procured from an Azerbaijani family that sells dried fruits at a little bazaar in L’viv.

My search for a tested and endorsed sunflower halvah recipe came up short. So, if Pickle Project readers have one to share, we are all ears!
Photo provided by Grace Eickmeyer, US Peace Corps Volunteer, Crimea. Thanks, Grace!
Posted by Sarah at 10:05 AM 4 comments:

From the Wedding Tree: Kalina Berries

Thanks to Peace Corps Volunteer Barb Trecker for soliciting another contribution to the Pickle Project.  Kalina berries are a vital part of Ukrainian traditions, and here's a short article and recipe by text by Larisa Malykh of Kiliya, Ukraine, above photo by Viacheslav Malykh, and translation by Barbara Trecker.
From ancient times, viburnum (kalina) was a favorite tree in Ukraine, loved by all people for the beauty she gives. In spring, viburnum blossoms are little snow-white umbrellas that look like the headdress of a fiancée. In autumn, viburnum makes the eye happy with its bushes and blood-red berries, which hang on through the frosts. Kalina was the traditional symbol of love and beauty, so wedding tables were decorated with these branches – and  thus the name “wedding tree.” But viburnum was not only admired for its beautiful attributes. This is also a remarkable medicinal plant! The viburnum plant contains ascorbic acid, tannins and glycosides, and for health maintenance, has enough vitamins to exceed the exotic lemon! In antiquity, the bark of viburnum was used as a styptic agent, and as a sedative for cramps.
Kalina berries are very delicious, especially after frosts. From recipes dating back to olden times, remarkable pies can be prepared, as well as cheesecakes, jams, fruit jellies, and pastries. All these sweets were easily accessible, and favorite for any family.
Viburnum also has applications in cosmetics and dermatology: the extract of viburnum flowers is a treatment for allergic skin reactions, and viburnum juice is a treatment for blemishes.

Babushka's  Recipe
Try it – it’s delicious!
To prepare a delicious and nourishing drink, the best thing to do is collect viburnum berries in winter, and grab them right after a frost. Pour boiling water over the frozen berries, and immediately pour the water back off. Then mash the berries, and again inundate them with boiling water. This will be ready to drink in 10-15 minutes. For better taste, add a globule of honey and a splash of lemon.

Second photo:  Kalina berries in a house at Pyrohiv,  the outdoor museum;  bottom:  dried kalina berries for sale at a market,  April, 2011
Posted by Linda at 4:44 AM 3 comments:

This week, I took a quick trip, amidst a pile of other work,  to Volodymyrs'ky Rynok (market),  near Palats Ukraina,  a place I'd been to once, early on my first trip to Ukraine, long before we thought about the Pickle Project.  Proved a great market scouting trip, both on the streets outside of the market and inside in the large hall.  What did I find this week?

Winter and a tiny bit of spring:  pumpkin, horseradish, eggs, potatos and spinach.

Dried herbs--but I think not so much for eating, as cleaning.  (Suggestions, corrections?) At lower right are the tops of little (bigger than a whisk broom, smaller than a U.S. full-sized broom) handmade brooms still used everywhere.

Pickled tomatos and below, pickled mushrooms and some sort of vegetable/cabbage/tomato mix.

The poultry counter:  chickens,  turkeys or ducks,  and on the right, some little bird we didn't recognize--squab?

Every market has dried fruit and nut venders, and for some reason,  the vast majority of them are from Uzbekistan.  This visit I noticed you could also buy Uzbek pottery at most of their booths, including a souvenir plate from Tashkent!

There are lots of imported fruits and vegetables at the market,  but this stall really represents local food.  Cabbage, potatoes,  carrots, turnips and beets.

There's something great about the market ladies:  sometimes a little gruff, always hard-working, and just sometimes, a smile.

And, yes, spring is coming!  Pansies and petunias are out at the market.  Enjoy!

Just a short post, highlighting this great picture.  It was sent to me by my friend Olga Cherems'ka of the Kharkiv Literature Museum,  and is of a lunch at her son's school,  at a special folk culture day, where the teachers prepared special dishes.  What's to eat?  Here's her description: