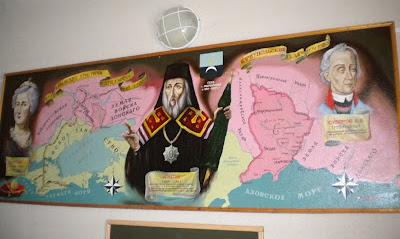 Last summer, the Pickle Project on Parade (as we endeavored to call it) visited the fascinating Mariupol Region of southeastern Ukraine. Our travels to this region were inspired by an interest in learning more about the Greek communities there and sharing their stories with Pickle Project readers. This post is the first in a series about the people, culture and cuisine of Greek Mariupol. Special thanks to Galina, Carina, Anna, Lubov and Tatiana for all of your ideas, enthusiasm and support in Mariupol.


Maripoul Oblast is home to largest Greek-Ukrainian population in the country. Lubov, an ethnographer at the Donetsk Regional Museum, explained that there has long been a strong Greek influence in the Mariupol region, as Greek sailors and traders made their way from the Sea of Azoz, across the southern steppes. Greek settlements in the region were expanded in the 1780’s as Katherine the Great sought to consolidate her rule in the Black Sea region, especially Crimea. At the time, Greeks were the primary labor force in Crimea, Lubov explained. In an effort to weaken rising powers of the Crimean Khanate on the Peninsula, Katherine’s forces pushed the Greek population, along with large groups of Crimean Tatars, into the territories of Mariupol. This was one component of Katherine’s larger “planned colonization” strategy undertaken across Ukraine.

Greek villages are scattered across the region but Saratana and Starry Krim (Old Crimea) are two of the most prominent. Greek cultural traditions and practices, including food preparation, remain strong in the region. We also learned that there are efforts underway to preserve the Greek language spoken in the villages of Mariupol, a dialect called Rumaiica.
We had the distinct pleasure of sitting down with Tatiana Bohadetsa, director of the Museum of Greek History and Ethnography in Sartana to sample some Greek-Ukrainian specialties. To our great indulgence, Tatiana is not only an expert of local Greek history and culture, she is also the author of a cookbook featuring Greek specialties of the region. 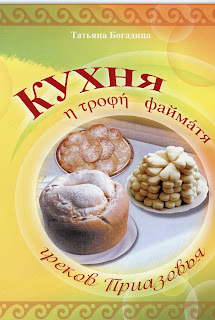 Included in this feast were the delightfully named smoosh (шмуш), puffy pastries filled with spiced meats or fish and potatoes. My favorite were crispy fried triangles stuffed with pumpkin and sauteed onions. 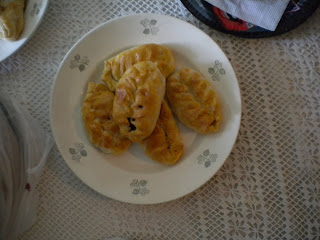 For Tatiana, these dishes are central to helping keep the connection to her Greek heritage alive. She also noted that food is an easy access point for people. It tastes good, helps them remember and helps them learn. We couldn’t agree more.

Top to bottom:
Mural at the museum in Saratana
Cookbook
Smoosh
Posted by Sarah at 3:50 PM No comments: 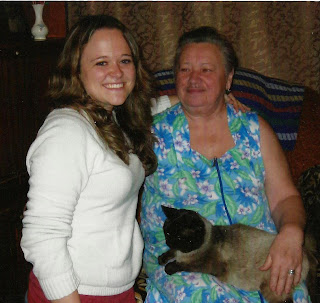 Toward the end of my service I agreed to participate in “Adopt-A-Cluster”, a practice developed by Peace Corps to encouraged seasoned, veteran volunteers to visit the brand-new trainee groups, (clusters), at their training sites.  Because the trainees had been interacting almost exclusively with Peace Corps staff and host-country nationals up to this point, getting the opportunity to pick the brains of current volunteers and get feel for the practicalities of Peace Corps life beyond the technicalities of training was invaluable.

So, with fond memories of the volunteer who had adopted my cluster two years before, I agreed to help with the project and boarded a train to Kyiv and then caught a bus and headed north to the city of Chernihiv.  A Ukrainian Peace Corps staff member met me at the bus stop on an especially cold and dark night and explained to me the plans for the next day as we walked quickly down a bumpy unlit sidewalk and then weaved our way through a maze of Soviet high-rise apartment buildings.  Soon enough we arrived at our destination and rang the buzzer.  A young woman answered the door, and pattering up behind her came an elderly woman. We were introduced – her name was Luibov – and I learned that Luibov would be hosting me for the next two nights.  The Peace Corps staff member then gave me a piece of paper with directions to where I was supposed to go the next morning, and left.  Luibov was cheerful and I was very pleased to find that she spoke only Russian (I had been trained and continued to study Russian, but often heard Ukrainian or the Russian-Ukrainian blend “Surjik” at my site, so communicating with someone who only used Russian was always a relief).  It was late however, so we did not talk much; she showed me to the living room where I was to sleep on the couch, and said goodnight. 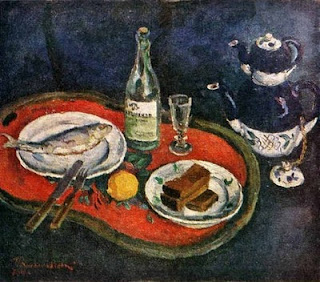 The next morning I found a typical Ukrainian breakfast spread for me on the table – buttered bread, slices of cheese and sausage, peach juice, and a bowl of pickles.  Ten minutes later, I had eaten three large dill pickles and packed two more for my lunch. They were very simply the best pickles I have ever had in my life.  Perfectly crunchy and tart but with a sweetness I’d never tasted before or since.  That night I cleaned the bowl once again and asked for the recipe.  In typical Ukrainian fashion, Luibov didn’t write it down but instead tried to explain the process verbally.  I knew I was in trouble when early on in her explanation she said “…then I add that brown seed…I don’t remember what it’s called…”
Several minutes later she finished giving me her “recipe”, and while I had a vague notion of what she had done, I definitely had not grasped enough details to duplicate her process.  Now, more than three years later, I remember nothing about that recipe except the brown mystery seed.

The next morning, as I was packing my bag to leave, Luibov approached me with a photo in a frame and a box and told me to sit down.  I was worried that if I didn’t leave soon I might miss my train, but I agreed to stay a few more minutes.  We sat down and Luibov opened the box. Inside were medals, newspaper clippings, coins, and various other knick-knacks.  She asked me if I knew what they were and I guessed army memorabilia, as medals from the Great Patriotic War (WWII) are commonplace souvenirs in Ukraine.  She smiled and shook her head and then showed me the photo. “That is me, and that is my husband” she said. The picture was of a couple standing on a stage in some sort of official ceremony. “We were in the KGB, the both of us, for almost thirty years. This is us receiving an award for our excellent service.”

Now of course, having lived in a former Soviet country for more than two years, I am sure that this was not my first interaction with someone who had been affiliated with the KGB, but this was the first time I’d been made aware of it.  The shock factor hit me as I realized that I had spent two nights under the roof of a 30 year KGB veteran.  Luibov then went on to joke that in all those 30 years she had never actually met an American until now.   “Look at these things Kim!” she exclaimed as she pawed through the box, “I cannot believe you are here in my home!” I shook my head in disbelief as well and we continued to laugh about it as I grabbed my bag and walked down the hall towards the front door.  I thanked her for her hospitality and headed out. I hadn’t made it more than a few steps when she called to me and scurried after me, holding out plastic baggy. I opened it – inside was a jar of pickles. Delicious KGB pickles. 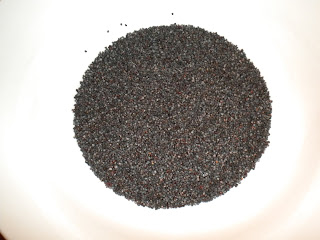 I have long wished to write a post about poppy seeds because they are fabulously under appreciated and prominently featured in a good many Ukrainian dishes. And, what do you know, thumbing through newly arrived April issue of the American food magazine Saveur, I found a charming article about these blue-black beauties. I felt scooped, of course, but it rekindled my interest in proffering poppy observations.

The perfumey tasting seed of the flowering plant Papver somniferum, poppy seeds (mak) are tiny and actually kidney shaped. They also have high fat content and are a rich source of calcium and manganese. I learned from Gabriella Gershenson’s Saveur article that poppy seeds are ancient and have been cultivated since the Neolithic era in Europe (around 1,000 years BCE). White poppy seeds are common in Asian cuisines and played a fascinating role in the British colonization of Bengali India. The indigo hued variety is more common in western, European dishes.

Often paired with honey, poppy seeds are widely used in Ukrainian fare. Poppy-laced cakes, doughnuts and swirly rolls are everyday treats. According to Culinaria, edited by Marion Trutter, Nicolai Gogol was rather fond of honeyed poppy seed cake, apparently calling it a “paradisaical dish.” Poppy seeds are also stuffed into a sweet vareneky (Ukrainian dumpling) or serve as the base for sweet sauces. Poppy is also the star of kutya (кутя), one of 12 traditional dishes served at Christmas time. Kutia is a kind of wheat porridge, lavender with poppy and sweetened with honey, that is topped with chopped walnuts and dried fruits. The dishes sweetness, I am told, mirrors the sweetness of Christ. And, boy is sweet! 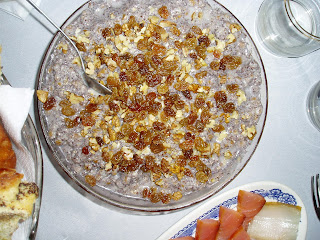 Of course, poppies are also the source of that ancient, Lethean substance opium, which is made from the air drying of the milky, white latex of unripe poppy seed pods. I have heard rumors about poppy cultivation being illegal in Ukraine. A friend even told me a story about a babushka in village in L’viv Oblast that was arrested for nurturing poppies in her kitchen garden. (Pray tell, dear Pickle Project readers, if you know about the legality of poppy cultivation in Ukraine). (Incidentally, through my meticulous web research, I also learned that, indeed, eating large quantities of poppy seeds will contribute to a false positive in drug testing, as was confirmed on an episode of the show MythBusters.) 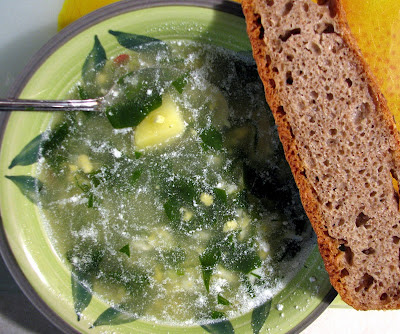