Back Then: Historic Food Photos

It always seems a bit disconnected when you visit an antique show or flea market--those objects and photos are untethered, let loose from the people and places that gave them meaning.  However,  it's always worth a look to see what you can discover and what you might learn.  Last weekend I went to the antiques market here in Kyiv, and amidst the great textiles, the guns and swords, the icons, and the paintings of Lenin, I found some piles of photographs. Searching through, I found some related to food and food production and began my own small collection.   I really don't know anything about these photos, other than the fact that several seem to relate directly to collective farming, and I hope some of the Pickle Project readers will both share what they know, if anything, about the content of these photos and share your own photos of foodways from Ukraine or the diaspora--from any time period--with us.

Understanding the historic context of Ukrainian foodways, in particular throughout the rapid, complicated change of the 20th century,  is critical to our understanding of foodways today.  So tell us more! 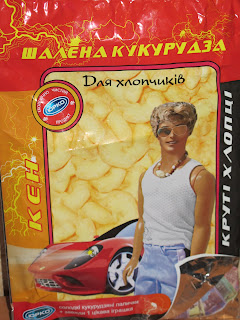 Gendered Junk Food? Check out a post on Clicking Again: Crazy corn for boys.
Posted by Sarah at 1:58 PM 1 comment:

From the Market at Winter's End

Just a few quick observations as I’ve returned to Ukraine for the next four months.  As I settle in, the Pickle Project encourages me to look more closely at the world I see every day.  In grocery stores in Kyiv, you can buy fruits and vegetables from around the world, at any time of year—the kind of grocery shopping that many of us, no matter where we live, have perhaps become too accustomed to.  Avocados, yes; eggplants, yes;  strawberries; yes.
But outside Kyiv’s metro stops you see what eating locally really means in this climate at this time of year.  At every Metro station, there are kiosks selling sodas and beer, the to me unusual purveyors of lingerie and stockings, and almost everywhere, women who come in from villages every day, with the ubiquitous plaid plastic market bags, to sell what they grow or make.

It’s just becoming spring, so what I see right now are edibles that have over-wintered:  nuts and pumpkin seeds, onions, potatoes, apples,  the red kalyna berries (a symbol of Ukraine), mushrooms,  cut-up orange squash, and these very small red and yellow items that I think are a sort of pumpkin or squash.  I was late for something so didn’t have time to stop and ask. Anyone want to make a guess for me?  [A one day later note--these are flower bulbs!] I even bought a tiny handmade Easter basket that looks like it’s made from woven cornhusks.
It’s a way of eating that many of us have forgotten—and in the case of the vendors (almost always women) provides important financial support for their families.  As for me, I look forward to seeing what spring and summer will bring.

The Refreshment of Spring: Birch Juice

Spring has sprung and it is time for birch juice! Birch sap flows in the early spring when the nights are cold but the days are warm, usually March and April in Ukraine. Birch juice tastes mostly like water with barely perceptible sweet, woody notes. As a food source, it is rich in vitamin C, sodium, potassium, manganese and calcium. As both Ukrainian foresters and grannies will attest, birch juice has medicinal properties and is a salubrious beverage. It is touted as an antioxidant that particularly supports the liver and kidneys. Unlike North American maple sap, in Ukraine, birch sap is typically drunk in its unadulterated form, rather than boiled into a thick, sweet syrup. (I have never seen birch syrup in Ukraine but, apparently, it is made. However, it is rather resource and time intensive. According to University of New Hampshire Cooperative Extension, the ratio of raw birch sap to syrup is 100 to 1. By comparison, 40 liters of raw maple sap are required for 1 liter of maple syrup. Despite this, birch syrup is allegedly an emerging cottage industry in Alaska.)

Many rural Ukrainian households collect and preserve birch juice for personal consumption. However, in Ukraine, the State Forestry Enterprises tend to be the largest collectors and have developed commercial operations. Several species of birch (Betula) may be tapped for juice. This involves driving a hole into the truck of the tree. As the temperature rises, the clear liquid sap flows from the hole and into waiting buckets. After collection, the juice is usually strained and enjoyed. However, birch sap is highly perishable and must be pasteurized and preserved almost immediately. Some folks prefer a little sugar or honey in their birch juice while others like it pure. I have also heard of birch wine and birch-vodka cocktails, although I have not yet had the pleasure!

If you have stories or photos related to tapping birch, preserving sap, the therapeutic wonders of birch juice or serving suggestions, please share. We would love to hear from you!

For information about tapping birch trees and making syrup, in English, see the University of New Hampshire Cooperative Extension’s site.
Posted by Sarah at 7:11 PM 8 comments: