A Flying Leap, from Pickles to Doughnuts

Celebrating the practice of food preservation and culture is at the heart of the Pickle Project. And, what better way to celebrate, than with decedent sweets? Although we may not typically associate pickles with doughnuts, preserved fruits and vegetable make their way into every aspect of Ukrainian Foodways. 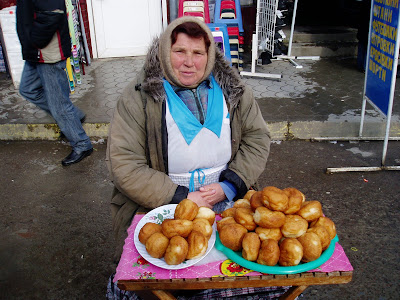 Pampooshke (пампушка) are the delicious doughnuts of Galicia, a region straddling the Polish Ukrainian border. Traditionally filled with fruit, flower or berry jams, pampooshka are a yeasted, deep fried doughnut. While pampooshke are typically a homemade special occasion food in Ukraine. In Poland, rose-jam filled pącza, as they called in Polish, are an everyday treat, sold in bakeries and from street carts. In eastern and central Ukraine, savory pampooshke, called smazhny or perizhky, are filled with meat, potatoes or cabbage.

Because Galacian pampooshka are one of my favorite treats and are typically filled with homegrown and preserved goods, I asked my friend Halya to teach me how to make them. So, on a snowy Sunday afternoon, I rode the crowded marshrutka from my L’viv apartment to her family’s home in Ivano Frankove (Yanif), a small village north east of the city, for a lesson and lunch with family. Overlooking her small kitchen garden, Halya’s cozy kitchen is easily one of my favorite places in Ukraine.

Lighting the burner on her 1960’s Polish stove with a match, Hayla told me about how she and her mother made doughnuts for the Old New Year, the New Year holiday of the Gregorian calendar. “Every family in Galicia has their own recipe” Halya told me “but it isn’t written down”. Halya’s husband Syrghiv, her son, Sasha, and daughter, Natalia, each pop into the kitchen periodically to check on the progress of the dough. For our pampooshke, we made fillings from homemade apricot jam and cherries preserved in syrup. To each, we mixed in potato flour, which thickens the jam so that it will hold up to the heat of frying. Both the cherries and the apricots are from the garden and are just two of the many fruits and vegetables Halya and her family grow or collect and preserve, sustaining them through the year. Many families in Ukrainian Roztochya still cultivate tea roses in their gardens for making jam (and rose tea) and it remains a popular and special flavor in Galician sweets, especially doughnuts.

Throughout the multi-stage proofing and shaping process, Halya carefully managed the kitchen window, opening or closing it periodically to keep the temperature in the kitchen just right for the dough. Once the doughnuts were golden brown on each side, she carefully removed each one of the browned beauties from oil and placed them on a tin plate lined with paper to drain. When she finally tasted the fruits of her labor, Halya’s brow furrowed.. “Not enough holes” she says “it should be lighter..” I took a bite of cherry pampooshka: it was crispy and crusty on the outside, soft and sweet inside. I smiled at Halya; I could find no fault with such a thing.

After a lunch of steaming solyanka, a spicy Georgian soup of sausage and boiled eggs, flavored with lemon, it is time for dessert. I placed an apricot pampooshka on a small plate for each member of the family; Halya followed me, drizzling a sauce made from melted dark chocolate and heavy cream over each pampooshka. Still warm, the apricot jam was sweet against the bitterness of the chocolate and the softness of the doughnut. A hush, punctuated by delighted sighs, fell over the table as we enjoyed the decadent pastry. I looked over Halya; she couldn’t help but smile. 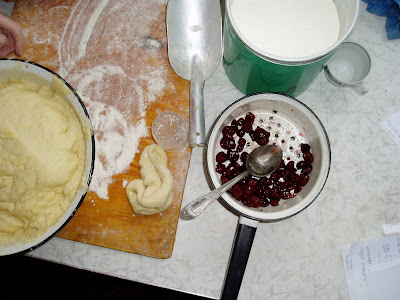 Then mix together 4 eggs and a glass (about a cup) of sugar. Add 0.1 gram of melted butter, some dried orange peel, vanilla and 2 spoons of horilka (Ukrainian vodka). The horilka prevents the mixture from becoming oily and helps it to become very soft. Wait and allow to rise again. Then, roll out in sheets about ½ inch thick, cutting rounds using the rim of a small glass. Allow to rise once more. Poke a hole in the side of each bun, hollowing the center. Carefully fill with a spoonful of thickened jam, using a pastry bag (plastic bag with a corner cut off at an angle to allow for precise filling) and reseal the sides as fully as possible. Fill a high-rimmed skillet or pot with oil, about an 1 ½ deep; heat over a medium/high flame. When the oil is hot but not smoking, carefully fry each pampooshka, flipping for even browning on each side. Drain on a paper towel-lined plate. Enjoy topped with powdered sugar, a simple white icing (as they do in Poland) or drizzled with chocolate, ala Halya.
Posted by Sarah at 8:36 AM 1 comment: 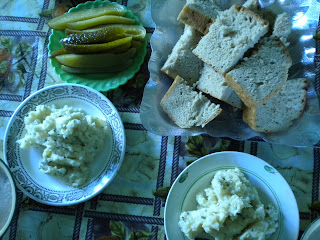 Bread is of seminal importance in Ukraine. Hearty and wholesome, it has been a staple, sustaining the Ukrainian people through years of transition. The “breadbasket” of the Soviet Union, the fertile soils of the Dnieper basin remain famous for wheat production. Indeed, bread and wheat also serve as important symbols of Ukrainian identity, wealth and strength. Fronds of wheat are common decorations during holidays and gifts of good luck. Elaborate celebratory loaves are baked for weddings and other special occasions.

And, yet bread is a ubiquitous part of life in Ukraine, an accompaniment at every meal. In the shops, discriminating customers, press their thumbs into loaves, scrutinizing crusts before finally settling. There are several common varieties of bread in Ukraine but a traditional favorite is black bread, or чорний хліб. Chocolate in color and made of buckwheat and rye, this bread is very dense and has a tangy, sweet flavor. With a crust often caked in caraway or coriander, honey or soft, fresh cheese make wonderful compliments.. Add a warm bowl of borscht, and you have a serious meal.

For a lovely discussion of bread and Russia, see Andrew Whitley’s 2001 “My Life, My Loaves” in Gastronomica.
Posted by Sarah at 12:39 PM No comments:

Want to learn more about the Pickle Project or share your stories and pictures of foodways in Ukraine?  We're particularly interesting in hearing about places worth visiting and people worth meeting--and seeing historic family photos of food.   So get in touch with us here by posting a comment.
Posted by Linda at 8:33 AM 45 comments: